How are people mounting these?

News, questions and bugs reports about CosmosEx by Jookie. Now we have a Raspberry Pi in our machines!

How are people mounting these?

Bought a CosmosEx, and originally was going to put it inside the Falcon. But Falcon doesn't have internal SCSI, so figured I could put it inside the MegaSTe and/or TT030. Well, I was going to put it in where the hard drive is. Unfortunately the hard drive 'bay' has a metal piece as part of it's bracket that is where the power switch on the CosmosEx is. So that won't work. Then I was thinking I could put it in the floppy drive bay, but then I'd have to basically chop up the beloved front of the system, even the 1040 STf is that way. Only one that isn't is the Falcon.

So I was thinking a few different possibilities.

A) Get an external SCSI case, drill a whole for the floppy cable to go through and build an external floppy to floppy ribbon cable. This would look really nice. Crappy thing about this? Falcon is the only one with an actual SCSI port on the back, would need ACSI -> SCSI adapter for the other three. And of course the big kick, the Falcon doesn't have an external floppy connector!

B) External Floppy Drive. This wouldn't need a cable to be made, you'd just need to modify it to slip in a ACSI/SCSI cable. I'd feel a bit less terrible about gutting the front of one of these and putting the CosmosEx inside of it, but then you still run into the ACSI vs SCSI situation and no external floppy connector in the Falcon.

C) Put it inside the Falcon, hack in an internal SCSI cable (I've seen the mods on this, they don't look too terrible...) and this would be pretty clean. Currently I have an HxC floppy emulator in there, since the floppy I had in there was dirty or dying (would read a disk once, then never again..).

D) Planning out and building a modified 'harness' in the Hard Drive bays inside the TT030/Mega STe. I think this would look the cleanest (Floppy in front is still in tact, though anyone know if you can have two internal floppy drives?) I was thinking of cramming the CosmosEx into there with a Bluetooth and Wifi adapters. (either that or when the Pi3 is supported, those are built in). Then I wouldn't have the need for any weird cables hanging outside, and I could use newer keyboards/mice (I haven't even looked to see if the IKBD thing works inside the Mega STe / TT030 yet though!) One downside of this option is that it'd be more difficult to swap in / out SD cards with different sets of software/OS set ups. If I could get it working internally like this, I'd probably end up ordering a second one for my TT030.

Thoughts on these? Do most people just have their hardware dangling outside their cases these days?

I really like the idea of a nicely modified external SCSI case (and maybe get a double decker so I could use a CD-ROM along with it), but that lack of an external floppy connector on the Falcon...

Ha, I ordered one, but that's still sort of a hanging out / into the case, right?

DeskTopper has not won beauty contests but it has always been a handy space case.
It has internal SCSI flat cable and external cable to Falcon connector at the back.
DeskTopper before with two SCSI CD and now with CosmosEx. I had original DeskTopper bracket still lying around.

I still use internal IDE drive as main hd and use CE only for access to a network share. Which is ideal for backup and direct access to downloads and files from the pc. That's all I need at the moment. CE Sting network driver works but I don't have use for it.
Falcon030, Mega ST, 1040STfm, 800XL, Lynx, Jaguar
Top

Whoa! That's awesome, never seen one of those before. Doesn't sound like they're available though. Well, that and I'd rather not change my Falcon's case. 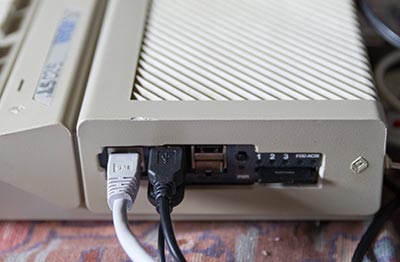 I had to cut a bit of the casing, but the result looks OK IMHO

I also had to remove a screw from the bottom of the CosmoEx so that the brass stud of the floppy would fit. I removed the top cover from the CosmoEx so the wifi of the Pi 3has at least a chance to get though, but I connect it with Ethernet nonetheless.

The Atari 520STe has only ASCI which is connected from the CosmoEx to the external port with the flat cable ribbon provided. 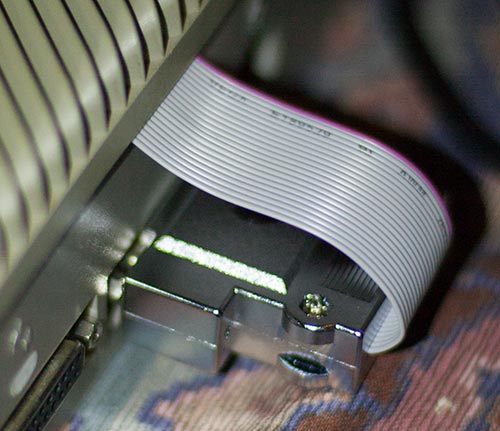 I have a few problems right now with the CosmoEx (hopefully not related to this connection), but that's for another topic.

Nice, from the other picture, couldn't see if it was mounted inside. I ordered the cable for the SCSI to do the same thing, but damned if I could get that thing twisted just right and set up inside the Falcon and being able to put the lid back on! Would definitely be cleaner/easier if someone would produce the boards that C-Lab put inside them for internal SCSI devices. *hint hint at someone*....
Atari 8Bits: 800xl, 600xl, XEGS, 800, 130xe, 130xe (VBXE, U1MB, Stereo POKEY)
Atari STs: 1040STf (broken shifter), 1040STe, Mega STe, TT030, Falcon (CT60e, SuperVidel)
Top

Aaaand just a last one because it was time to tidy everything after replacing the Pi3 by a 2 (to lower the power consumption). 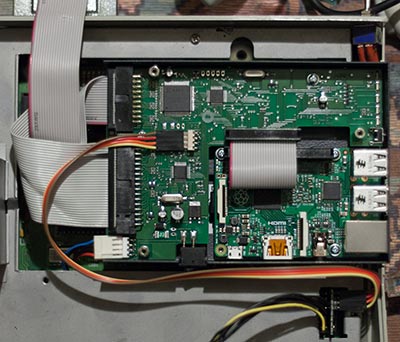 Got my 1040STe, but found it's a virgin! (the warranty sticker isn't broken).

Question though, is the Raspbian / Pi3 version of the CE distro available for download somewhere? I think I decided it'd be easiest to pop it into either my Mega STe or TT030, since they already have internal floppy and SCSI that would hook up to it, but if I could get the Pi3 working with wireless / bluetooth I could use keyboards and network through it, right?
Atari 8Bits: 800xl, 600xl, XEGS, 800, 130xe, 130xe (VBXE, U1MB, Stereo POKEY)
Atari STs: 1040STf (broken shifter), 1040STe, Mega STe, TT030, Falcon (CT60e, SuperVidel)
Top

Thanks for the links! I did get an SD card with it, but it had the older version because I bought it quite some time ago, still have yet as to use it due to trying to figure out how to mount it. Currently an HxC 2001 Floppy Emulator is sitting in my Falcon, with the exception of needing to convert the .ST images, it works pretty well, but really wanted the CosmosEX in one of my machines. Need room for setting all of this up