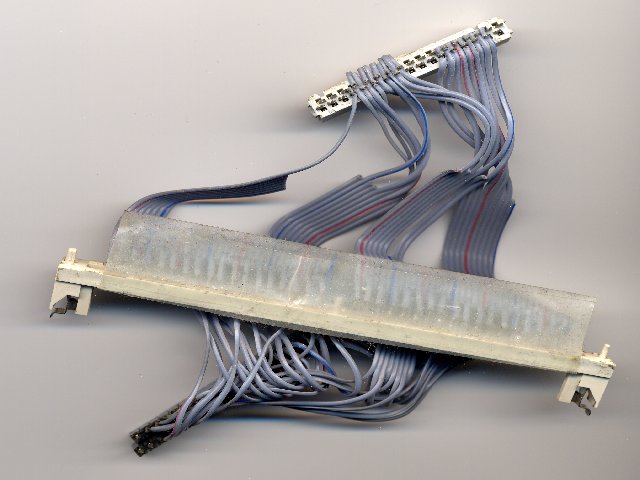 I built my own 14mb card last week using an old crap ATIN memory card with the sockets removed, and a new 72pin socket from an old PC mobo. Its great what you can do with solder and hotglue

Can't believe it worked first time. Still get some sparklies at 25mhz, but no artifacts at 20mhz. This is with a CT60 fitted with solders.

Anyway. I am considering getting a small batch of Rodolphes CTR14 cards made for as little as possible cost, so I need to know how many people want them???

Hi Coda, i'd like to buy one of these CTR14 card.
Count me in.
Was known as Ozone-design in Cerebral Vortex back in the good ol'years
Top

Hi guys!
Count me in, if it's a standard upgrade not requiring a CT board.
(of course, price is relevant

PS welcome abroad to me

I have been reading this forum every now and then, then I decided to subscribe.
I am a long time AtariAge regular (and other long time running Atari gaming sites/forums).
I also have been a first-hour Atari user, but due to lack of time, I didn't manage in staying updated as I wish.
Now, I am trying to recover lost time, so please be patient with me.
Ciao!
Top

in other thread in this forum we already mentioned, that I'm preparing little batch of my own RAM cards. More info at http://www.volny.cz/boban07/RAM_kartice/
This week I want to order parts, so if you are interrested, please let me know. Just for sure: all of my cards are with SIMM fitted and tested with 25MHz BUS ! My RAM card replaces "original" RAM.
With regards,
P.B.S.
MILAN 060@60; FALCON030@25-Phantom .........
Top

I decided not to follow up making of the cards for 2 reasons: I only had about 5 pre-orders, and then I found someone else was taking orders for the same, so I am ordering mine from them...
Top

I believe you have to use a 16MB SIMM module but the Falcon is only able to address 14MB of it
UNSEEN MENACE
Several STFM's, 4MB STE, 2MB TT with 1.2GB Hard Drive and 14MB Falcon with 540MB Hard Drive,
Lynx 2 and Jaguar with JagCD
Member of GamebaseST and AtariLegend team
Check out my website at http://unseenmenace.110mb.com
Top

ok is there no way to make it address more more than 16mb?
Top

Know anywhere that has schematics for a FastRAM card or is it a lot more complicate dthan the standard RAM board?
UNSEEN MENACE
Several STFM's, 4MB STE, 2MB TT with 1.2GB Hard Drive and 14MB Falcon with 540MB Hard Drive,
Lynx 2 and Jaguar with JagCD
Member of GamebaseST and AtariLegend team
Check out my website at http://unseenmenace.110mb.com
Top

I think thats a bit unfair. When making devices such as these in such small quantities the price per unit will inevitably be high unless you have free access to the equipment needed and can get small quantities of components at a reasonable price. A lot of component suppliers have pretty large minimum orders by our standards and this makes it very difficult to get all the parts cheaply.
UNSEEN MENACE
Several STFM's, 4MB STE, 2MB TT with 1.2GB Hard Drive and 14MB Falcon with 540MB Hard Drive,
Lynx 2 and Jaguar with JagCD
Member of GamebaseST and AtariLegend team
Check out my website at http://unseenmenace.110mb.com
Top

Most places don't want to know you unless you are buying in 1000 piece increments!
Top

The price of the CT63 is eminently reasonable! As already mentioned, the cost for components rises almost exponentially when bought in "retail" quantities as opposed to buying them on a per-truckload basis. Compared to all the disposable, buggy cards for the peecee that can be made by the gazillion for a penny a pop, Czuba tech has very high overhead costs. The CT60/63 is a high quality board that has gone through a process completely unheard of in the PC world. Its called beta testing. And it, too, costs money.

In the PC world, "beta testing" is done on the cheap, usually like this: First by fast-tracking into immediate production some random, unfinished engineering project, giving it a mysterious pop-culture bullshit "code name", renaming the file "design_goals.doc" to "product_specifications.doc", announcing it with great fanfare to "the media", releasing to the public whatever piece of poo rolls off the production line with the goal of selling as many units as possible in the shortest amount of time. These unwitting saps are your beta test group. Great concept for companies unencumbered by a sense of morality. Anyway, the point is you're buying a board that works as advertised, has been fully vetted and will stand the test of time, not some haphazzard throwaway for the PC.

One other factor to consider is resale value. If you drop 300 Euros on a CT-63, you haven't really "lost" anything! That card is as good as money in the bank. If you doubt it, look at the prices Cyberstorm accelerators for Amigas go for on ebay. A few years ago I actually got MORE for a MKIII than what I had paid for it brand new five years earlier. Stock Atari Falcons get $600+, even 15 years after they were made. PCs go unclaimed in the trash after about 6 months. I've never even seen a Falcon with a CT-60 in it on ebay, but if there was I have no doubt it would sell for a minimum $1,000.

If you have a problem with the price, look at the CT-63 as an "investment".

PBS07 wrote:in other thread in this forum we already mentioned, that I'm preparing little batch of my own RAM cards. More info at http://www.volny.cz/boban07/RAM_kartice/
This week I want to order parts, so if you are interrested, please let me know. Just for sure: all of my cards are with SIMM fitted and tested with 25MHz BUS ! My RAM card replaces "original" RAM.
With regards,

I recommend this card to anyone. It's cheap and works perfectly at 25Mhz!
Ain't no space like PeP-space.
Top

030falcon030 wrote:not every1 has got bags of cash all over the place and can afford a ct63 if the price became slightly affordable then i would buy one czuba tech is daylight robbery

No. The CT6x is extremely cheap. I highly doubt he gets any profit from it, at least not much. If you had any idea of the costs involved when making smaller batches of high-tech stuff like this, you would agree.
Ain't no space like PeP-space.
Top

Hi!
i want to buy 14mb card, maybe someone want to sell me one?
im trying to contact Petr, but no answer. seems he don`t make expansion carts anymore...
and cart from wizztronics on best electronics site is sooo expensive, 100$ its too much
Top

[ProToS] wrote:you can try from B&C computervision they are a little bit cheapper if they still have them

hmm, no answer... this is only a cart, without simm?
Top